Homes and Lives of the Poor​ 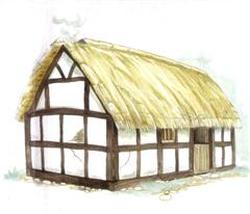 Their houses were made out of straw and many other things, including and dung and mud. The houses were very simple. A fire in the middle of the house is where all the people would cook. They would have a couple of pots and pans. The furniture was normally a small wooden table and a little stall that they had made themselves. They would have a wooden bowl and spoon to eat with. The floor below them was not floor it was the earth.

The water they had come from a stream or a river. The toilet was basic a hole in the ground. The rubbish would go in a field or bush. The longest they would live for is about 30 if you lived longer you were lucky. The children of poor people would not go to school because they had to work. There were a lot more poor people than rich.