Long hours studying and working didn't stop Tudor children having fun and playing games. Toys were often made from wood or materials which were easily available, such as clay, stone and animal bones. Pig bladders were blown up to make footballs, hoops were made from old barrels, and pebbles or cherry stones were used to play marbles or jacks.

Not many children went to school in Tudor times. Those that did go were mainly the sons of wealthy or working families who could afford to pay the attendance fee. Boys began school at the age of 4 and moved to grammar school when they were 7. Girls were either kept at home by their parents to help with housework or sent out to work to bring money in for the family.
Boys were educated for work and the girls for marriage and running a household. The wealthiest families hired a tutor to teach the boys at home and many Tudor towns and villages had a parish school where the local vicar taught boys to read and write.

Lessons
At school, pupils often had to speak in Latin. They were also taught Greek, religion and mathematics. The boys practiced writing in ink by copying the alphabet and the Lord's Prayer.
There were few books, so pupils read from hornbooks instead. These wooden boards had the alphabet, prayers or other writings pinned to them and were covered with a thin layer of transparent cow's horn.

The School Day
It was usual for children to attend six days a week. The school day started at 7:00 am in winter and 6:00 am in summer. It finished about 5:00 pm. Petty schools had shorter hours, mostly to allow poorer boys the opportunity to work as well.

Punishments
Teachers were very strict, often beating their pupils with birches if they misbehaved. Birches were a type of cane. Teachers used to give 50 strokes of the birch. Pupils were sometimes too scared to go to school because of the beatings.

Pupils from wealthy families could often afford a special friend called a 'whipping-boy'. When the rich child was naughty, it was the whipping-boy who received the punishment.

Types of Schools
There were two types of school in Tudor times: 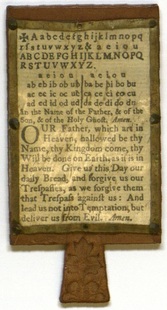