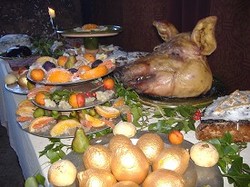 The Tudor people ate a lot of fresh food because there was no way of storing food to be eaten later. There was no such thing as freezers or fridges in the Tudor times. They ate with fingers, knives and spoons. There were no forks.

Meat
People kept animals all year round and would kill them just before they needed to be eaten. This meant that the meat was always fresh. To improve the flavour of games, such as deer, pheasant and rabbit, it was hung from the ceiling in a cold room for several days before eating. Three-quarters (75%) of the rich Tudor diet was made up of meat such as oxen, deer, calves, pigs, badger or wild boar. Birds were also eaten, such as chicken, pigeons, sparrows, heron, crane, pheasant, woodcock, partridge, blackbirds and peacocks. 75% of the Tudor diet was meat. Some meat was preserved by rubbing salt into it.

Fruit and vegetables
Fruit and vegetables were mostly eaten when they were in season and soon after picking. They ate fruits such as pears, apples, plums and cherries. Bananas and other fruits only grown abroad were not heard of during the Tudor times. Some fruits were preserved in syrup to make them last longer through the winter months. Fruit and vegetables could only be eaten when they were in season. The common vegetables were cabbages and onions. Towards the end of the Tudor period, new foods were brought over from the Americas e.g. potatoes, tomatoes, peppers, maize and turkey.
​
Fish
Fish was eaten by people living near rivers and the sea. The fresh water fish included eels, pike, perch, trout, sturgeon, roach, and salmon. It was compulsory to eat fish on Fridays and during Lent.

Drink
Instead of drinking water with their meals, they often drank ale and the rich drank wine. Water was often unfit for drinking because it was contaminated with sewage.

Sugar
Sugar came from abroad and so was expensive. The Tudor people often used honey to sweeten their food instead.

Food for the Poor
Poor people ate a herb-flavoured soup called pottage which would be served with bread. It was made of peas, milk, egg yolks, breadcrumbs and parsley and flavoured with saffron and ginger. They also ate chickens which they could rear themselves, beef from the local market when they had the money, and rabbits which they could catch for themselves.﻿